The mid-twentieth century Pennsylvania historical marker in Monongahela City’s Memorial Park for Indian mounds Adena people raised over some of their dead is evidence that a generation which came of age during the first world war, survived an influenza pandemic, the Great Depression, and a second world war felt connected to the local culture two millennia earlier.  The state marker’s text mentions the late-nineteenth excavation of the largest mound, the Crall Mound, recreated in an archaeological exhibit and contextualized on a granite historical marker. 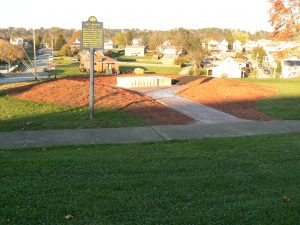 PA historical marker and its elaboration 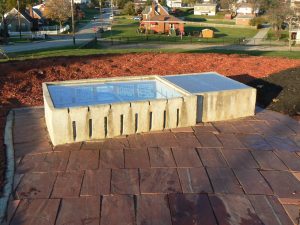 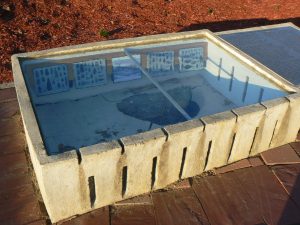 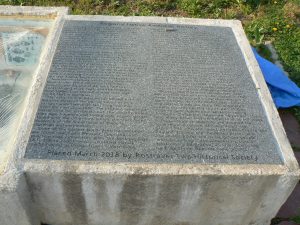 Cultures are a product of history. The Fa-

led a meeting of whiskey rebels near here.

activity his team uncovered in Meadowcroft

Rockshelter, Paleo, Archaic, and Woodland to

Our region, 32 counties in four states, was

established by the Monongahela culture (A. D.

Mound building during Adena (800 B.C. to

times was centered near Chillicothe, Ohio.

and the selectors of Ohio’s first state capital.

Don Dragoo in Mounds for the Dead notes

basic cultural continuity for the Adena along

with increasing Central American influences in

the Adena, Hopewell, and Mississippians.

at 16 feet, and the region’s third largest Crall

Mound at nine feet high by 60 feet in diameter.

features three of the burials found when a six-

foot-wide trench 35 feet long was dug from the

held no artifacts, but the ritually killed tube

found with the other two burials are repro-

duced, evidence of the importance of trade in

Some of the earliest North American

ana, a practice that culminates with the Missis-

culture reached as far as Florida from its

Adena and Hopewell wealth stemmed from

proximity to the Flint Ridge quarries and the

associated trade routes that developed in

central Ohio, near the spectacular Newark

earthworks of the Hopewell.

tinctions, such as cranial deformation among

the elite still practiced by the Pacific Northwest

their religion came from the southwest along

with corn and beans. While Northeast Indians,

including those locally, played the chunkey

game and adopted bows and arrows, they re-

The central McKees Rocks burial was an

ings. Several mounds, some of stone, near

the Crall Mound were destroyed. An Indian ceme-

tery on a farm four to five miles west above Pi-

geon Creek had over a hundred shallow, flag-

stone-covered graves, nearly all of infants and

and possible descendants’ unanalyzed. In 1890

and related tribes are likely Monongahelans.

and many other Native Americans. It still does.

These migrants added to and adopted the

local regional culture, as many would later.

From 1745 onward, wars between France and

England, England and the United States, and

the United States and its indigenous people

we spring from the same ground.

Cultural continuity in the Americas, a subtext close to the surface in the above text, has not been widely studied or considered, yet its efficacy in explaining regional differences is fundamental.  Just as Native American history is the basis and yardstick for interpreting what happened in the past throughout the hemisphere, indigenous cultures bubble up from the lower classes and eventually overwhelm Eurocentric, African, and Asian folkways